i’ve mentioned the celebrations of the 150th anniversary of postcards on the last few videos, but I wanted to write a bit more about it here so that i can remember it one day.

basically, at some point last year we noticed that postcards were turning 150 years old on october 1st 2019. this seemed like a huge deal — it’s not everyday that this thing that is such an important part of our lives turns 150! when we looked around though, there didn’t seem to be anyone who remembered it, and nothing big was being planned to celebrate this milestone… so we thought, why don’t WE do something?

and so it started! we researched the history of postcards as thoroughly as we could, and then got in touch with post offices and postal museums to prompt them to do stuff. we did a little “logo” of sorts for the project, built a website about it, invited people to join in as well and organize meetings to celebrate the occasion. so many people got involved that dozens of events ended up being organized around the world on october 1st this year, from get-togethers of postcard enthusiasts, exhibitions and guided tours, workshops for kids and grown-ups, seminars, philatelic releases, even free postage on postcards in one country. it was a truly a global party, from åland to zimbabwe!

but we wanted to do something more still, something that honored and showed people what postcards mean to us. so we thought… why not a postcard exhibition? not a boring one with antique stuff, but a modern affair: we wanted to somehow tell the world that 150 years later, postcards still had a role to play in our (evermore digital) lives. it’s not like we lack postcards, or don’t know enough people who love them! :) so we got scheming, sent lots of emails, and in the end managed to secure a wall where we could stick some cards. but not just any way — a wall at the UPU headquarters, in switzerland.

(this was huge! it’s hard to explain to people who are not in the postal world what the UPU is, as few have heard of it. but mail as it works today is only possible thanks to the UPU, the UN organization that brings together all postal operators in the world in a tight cooperation. it has been doing this for over 145 years, making sure that mail sent from anywhere has a way to be delivered elsewhere in an efficient, straightforward way. they set up tariffs, define standards, decide protocols, goals and strategies… they’re pretty much the big boss of all the post offices.)

getting a wall at UPU felt like christmas and a birthday all rolled up into one lucky bundle, it was an honor and an incredible opportunity, and it made us scared and excited in equal measures. after that, time went by really quickly: we announced a call-for-postcards for this exhibition, received tons of cards, frantically planned the layout and found a printing shop in town that helped us figure out how to stick stuff to walls.

i guess what we lacked in knowledge about setting up exhibitions, we made up for in enthusiasm, and somehow that was enough.

i borrowed my brother’s gopro and tried to make a little making-of video, since i’ve always enjoyed watching them myself. :) it took two whole days to put it together and looking at it in retrospect, i’m kind of amazed that we did this thing and that we look so competent while doing it. we were so scared of messing it up that we hardly stopped to eat those days. i think we just ran on adrenaline!

here are some pictures of the final result: 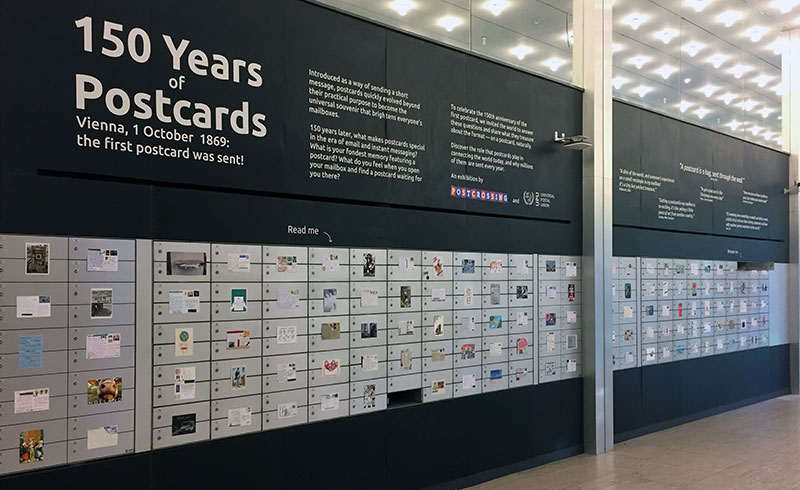 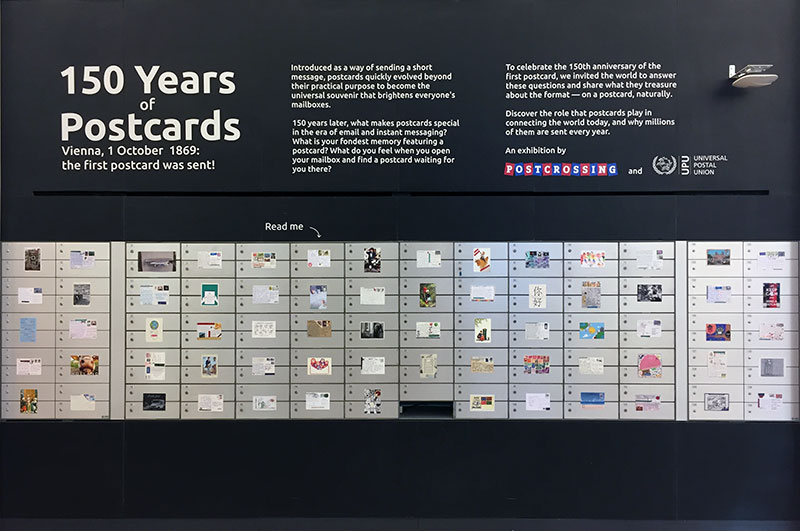 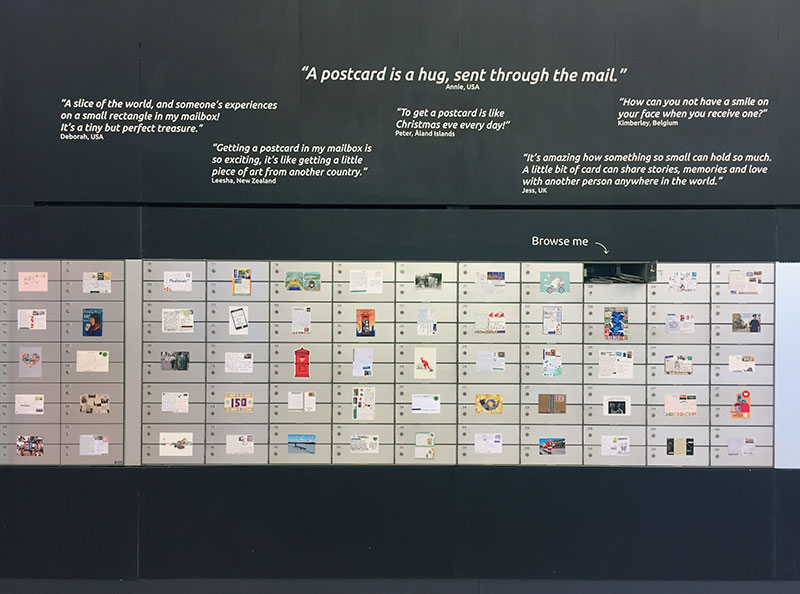 so despite all our trepidation, things worked out great in the end and i’m proud of it. this was the big thing for the year, and i think we gave postcards a good celebration. happy 150th anniversary, little pieces of mailbox sunshine! :)

1 reply on “the upu exhibition”