things haven’t been right for awhile. if i’m being honest, i think i’ve had back pain of some form or another for over a year… in the beginning i’d notice it more when we had to drive for long stretches (driving from portugal to slovenia), a persistent and nagging pain on my lower back that shot all through my right leg until it became uncomfortable to sit. then it started appearing when i had been sitting for awhile… which in my line of work is everyday. then 2 months ago or so, it got so bad i had to lay down, load on painkillers and just… wait. that’s the thing with backpain, everybody tells you to slow down and wait. most of the times, it goes away by itself.

mine did too, to a certain extent, but never fully. and then about 3 weeks ago, after a trip to ikea, it came back full force and with a vengeance. i could barely walk or turn in bed, and even loaded on painkillers, it was excruciating. so we got some heat patches, and took a trip home, almost directly to the emergency room.

an x-ray and an mri later, and my doctor told me i have a spinal disc herniation. basically, the cushion between my vertebras has been abused and is being forced out of its place and into my spinal canal, pressing on the sciatic nerve. this is what makes my leg hurt. it looks like this: 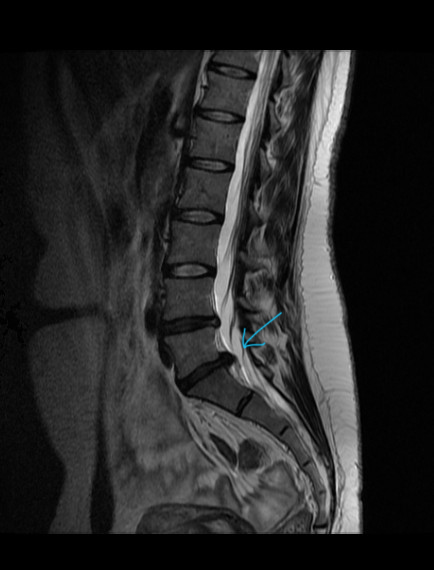 the treatment? well, after a week of rest, a cocktail of drugs and a shot of corticosteroids, i am almost as good as new, pain-wise. the doctor says this won’t ever go away, i’ll just have to learn how to live with it, which includes not doing heavy lifting or sitting for long periods, and strengthening the lower back. so i’m taking up light swimming this summer, doing some back exercises and just generally taking it easy. if you spend a lot of time sitting down, you should too!

Glad to know that you’re doing better, some of your facebook updates were worrying me ! I tend to get backpains too, and like you I spend a lot of time sitting, so I was wondering, what kind of back exercises do you find useful ?

@Nathalie: there’s a group of exercises called “Egoscue”, they work for me: http://www.youtube.com/watch?v=rqNnmC09eUU :)

oh my, you poor thing. i had the exact same happen to me and i was out for a year. partying was over and i did my whole third year of college learning in laying down.
i treated the worst back pain with the right exercises and when i could walk normaly i started doing pilates.
keep on exercising

deario! what can i say except of: i feel with you and i’m glad it turn out a bit more comfy for you? in my case, my employer bought a special desk for my office. i can adjust it from 70 cm to 160 (well you know how small i am ;)) but it really helps to stand up for working. beside that i go to swim regulary -> other sports are like commit suicide for our bones.
take care AND yes we’re getting older – the 3 is coming faster than we wish! ;) many big hugs and keep on!

OUCH!! Not good that there’s nothing to be done but be sensible and manage it, but at least you know what is wrong now and how to deal with it. I hope the swimming, etc helps.

hello Ana
Wishing you all the best with your health…
Sometimes life says’ stop’.
At that point I met Postcrossing…and it makes me healthy…
Thank you for sharing your story and all the nice pictures from your life in Berlin.
We all travel a little bit together.
nice bike!!!! maybe you can pimp the bycicle up with some colours…
so you recognize him as yours from far…:)
HE-ARTGREETINGS from Belgium.

[…] discovered i really liked a camera named holga, collected a few more for good measure 22. got a spinal disc herniation, but managed to recover ok from it 23. went snowboarding, horse racing, snorkeling and geocaching […]

[…] – mostly weight i put on during christmas’ glutenfest. also, nothing aches (not even my dodgy back), nothing’s swollen and my energy levels are […]

[…] 1.5 years after the first orthopedic intermission, my back decided to remind me once again that it is here, and it has a saying on things. all it […]

[…] dodgy back reared up its ugly head once again, so february was forcibly a slower month, with lots of […]

[…] 1.5 years after the first orthopedic intermission, my back decided to remind me once again that it is here, and it has a saying on things. all it […]

[…] turns out, the tingling in my arm is the beginning of another herniated disc, this time towards the end of my neck… sigh. i still have to see a proper doctor, but yeah. […]